A stomal hernia (also called a para-stomal hernia) is a type of incisional hernia that occurs next to a stoma. It is a common problem, and can be challenging to manage. 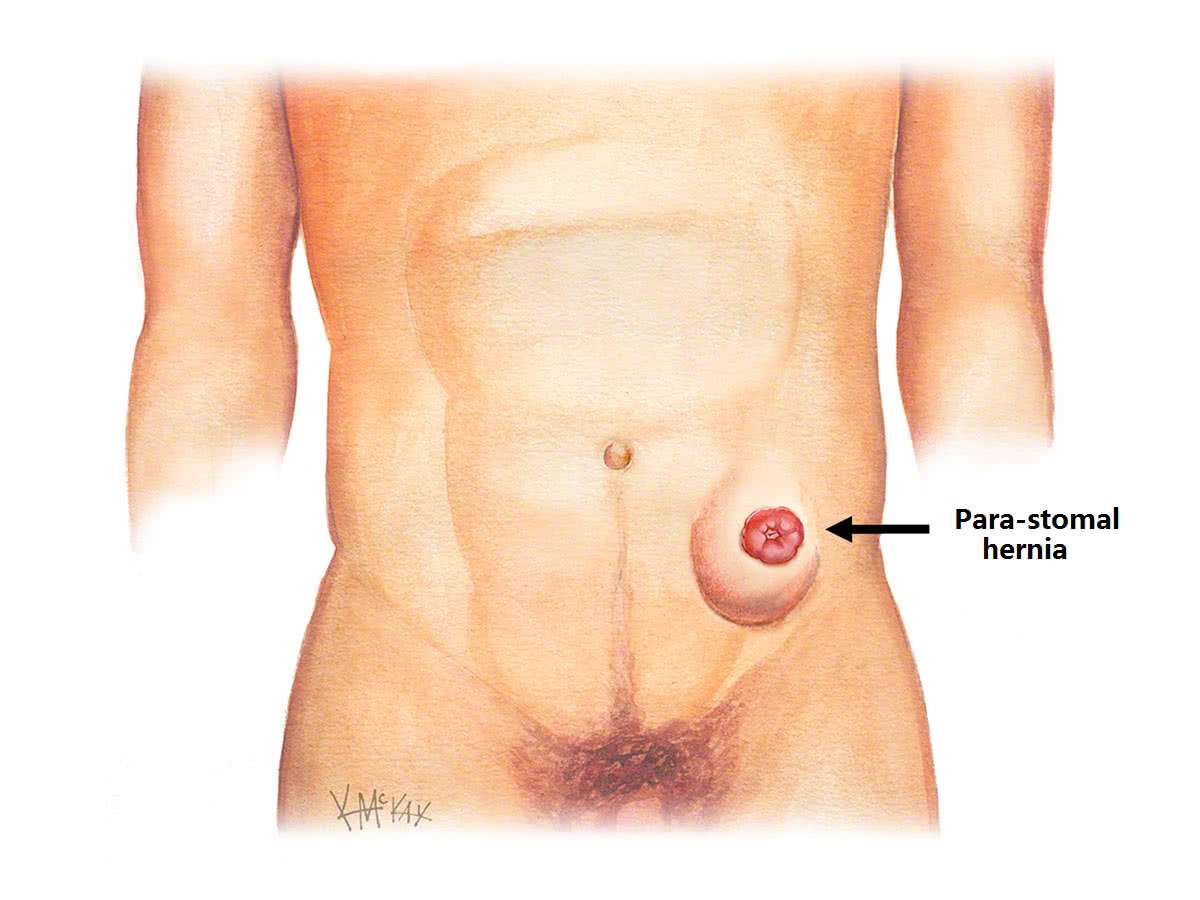 Stomal hernias result when there is a widening of the surgical hole (trephine) created in the abdominal wall at the time of original stoma formation. This hernia results from tangential forces that stretch on the trephine over time. They are a common and difficult complication to manage. In fact, some degree of herniation is argued to be inevitable, and does not always represent a true hernia.

As a general rule, up to half of stomas will develop a para-stomal hernia, and most occur within the first two years.

A parastomal hernia is a protrusion of abdominal contents (commonly bowel or fatty omentum) through a weakness in the abdominal wall at the site of the previous hole (trephine) made for delivering the stoma. They are traditionally classified clinically into four sub-types:

The actual type of hernia is not as important as the contents of the hernia, and whether or not the hernia causes symptoms. Parastomal hernias that contain bowel and cause obstructive symptoms such as abdominal bloating and vomiting with pain, are the hernias that are most likely to need repairing.

Technical factors and patient factors are responsible for parastomal hernias.

Technical factors frequently responsible include the site of stoma placement, size of the trephine, and method of fixation used.

The size of the trephine is likely to be the most important. A large scientific review found that para-stomal hernias were more common in those people with a trephine greater that 35mm, with a 10% increase in hernia rate for every 1mm increase in size. An analysis of the forces acting upon the trephine that cause dilatation, and ultimately a hernia, show that the larger the trephine radius, the stronger the tangential force pulling the trephine apart, and the greater the risk of herniation. This physical analysis supports the clinical findings that para-stomal hernias are less common following a small bowel stoma (ileostomy) than a large bowel stoma (colostomy).

Patient factors that increase the risk of para-stomal herniation include the following:

Obesity appears to be the stand-out risk factor. Those with a waist circumference of greater than 100cm or BMI >30 are at particular risk. Those having a stoma as part of an emergency procedure are also at increased risk, as poor nutrition, immunosuppression, and large hole (trephine) to accommodate a swollen bowel are all likely to co-exist.

There is growing evidence to suggest that defects in collagen metabolism lead to altered wound repair and increase the risk of hernias.

The aim of prevention is to minimise both the technical and patient risk factors already described.

Surgery for parastomal hernia is required if it is symptomatic, progressively enlarging, or contain bowel being irreducible. Surgical options include repair of the hernia, or reversal or re-siting of the stoma.