Common indications for a stoma hernia repair include:

The ideal repair is one that is safe to perform, with limited morbidity, and associated with a low recurrence rate. A multitude of different techniques and approaches have been reported. There is a paucity of good quality evidence comparing each of these techniques. Laparoscopic para-stomal hernia repair has more recently increased in popularity, the main appeal the avoidance of a large abdominal incision, have added further confusion to this debate. 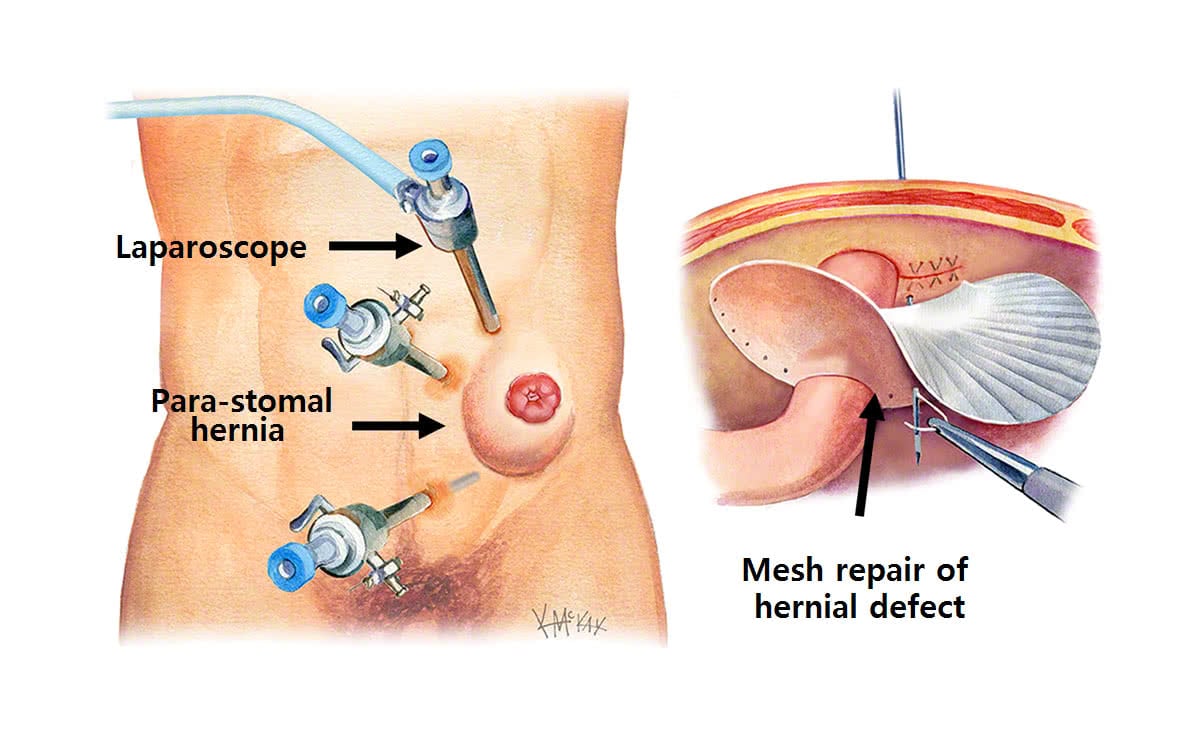 Sutured repair without mesh was traditionally performed as a local direct repair or via a midline abdominal incision (laparotomy). More recently it is being performed key-hole (laparoscopically). A sutured repair alone without mesh is advised against as it is a tensioned repair that ultimately pulls through the weak tissues of the abdominal wall, and is therefore likely to be associated with a high recurrence.

The high local failure rate of sutured fascial repairs for para-stoma hernias led Rosin and Bonardi in1977 to introduce the use of prosthetic mesh as a method of reinforcing the repair. The overall success rate for a repair with mesh is relatively high compared with repair without mesh. However, complications such as contamination of the mesh and fistula formation, while very rare, can be devastating. Nonetheless, mesh repair has become the standard practice for all para-stoma hernia repairs.

This involves a skin and subcutaneous incision made either at or next to the stoma to allow dissection and direct sutured repair of the hernia defect, followed by reinforcement with mesh that is sutured on top of the fascia of the abdominal wall beneath the fat (onlay mesh repair).

Access to the hernia is can be achieved by means of a midline abdominal incision (laparotomy) or via a key-hole (laparoscopic) approach. The mesh is placed inside the abdomen below the fascia (sublay technique). The evidence to support mesh repairs is mostly from small non-randomised series. Intra-abdominal mesh is becoming increasingly popular, with the increased use of the laparoscopic approach, as well as the increased production of improved meshes that are dual layered (composite) such as Composix® containing an inner non-porous ‘non-adherent’ layer of polytetraflouroethylene (PTFE) that prevents bowel adherence, and an outer porous layer of polyprophylene (Prolene®) that promotes adhesion (tissue incorporation) to the abdominal wall, thus strengthening it.

The main biological substitute for prosthetic mesh on the market are those made from human collaged including AlloDerm® (non-crosslinked human acellular dermal matrix) and those made from porcine, which include Veritas® (non-crosslinked porcine pericardium), Periguard® (crosslinked porcine pericardium), Permacol®, and SurgiSIS® (crosslinked porcine dermal collagen). Crosslinked grafts have better tissue incorporation, neovascularisation and extracellular matrix deposition (similar to prosthetic mesh) than non-crosslinked meshed. But it remains controversial whether this translates into a better, stronger repair. The main theoretical appeal of biologic meshes is the avoidance of adhesions and infection or erosion into bowel seen more commonly with non-dissolvable synthetic meshes. However, their cost remains a prohibitive factor. These biological products are also not designed to last, with eventual disintegration. Whether these meshes are clinically useful depends on a balance between collagenase-mediated degradation and the rate of new tissue ingrowth. If the bio-prosthesis is absorbed before adequate collagen differentiation, the quality and strength of the newly formed tissue will be insufficient and the repair weak. This would presumably lead to a higher hernia recurrence rate.

Resiting is a traditional approach that was popularised by a colorectal surgeon (Goligher). The problem with this approach is that the same approach is likely to achieve the same result, with the new stoma at the same high risk of hernia formation as the original stoma. High recurrence rates of 36% have led to resiting being an option of last choice.