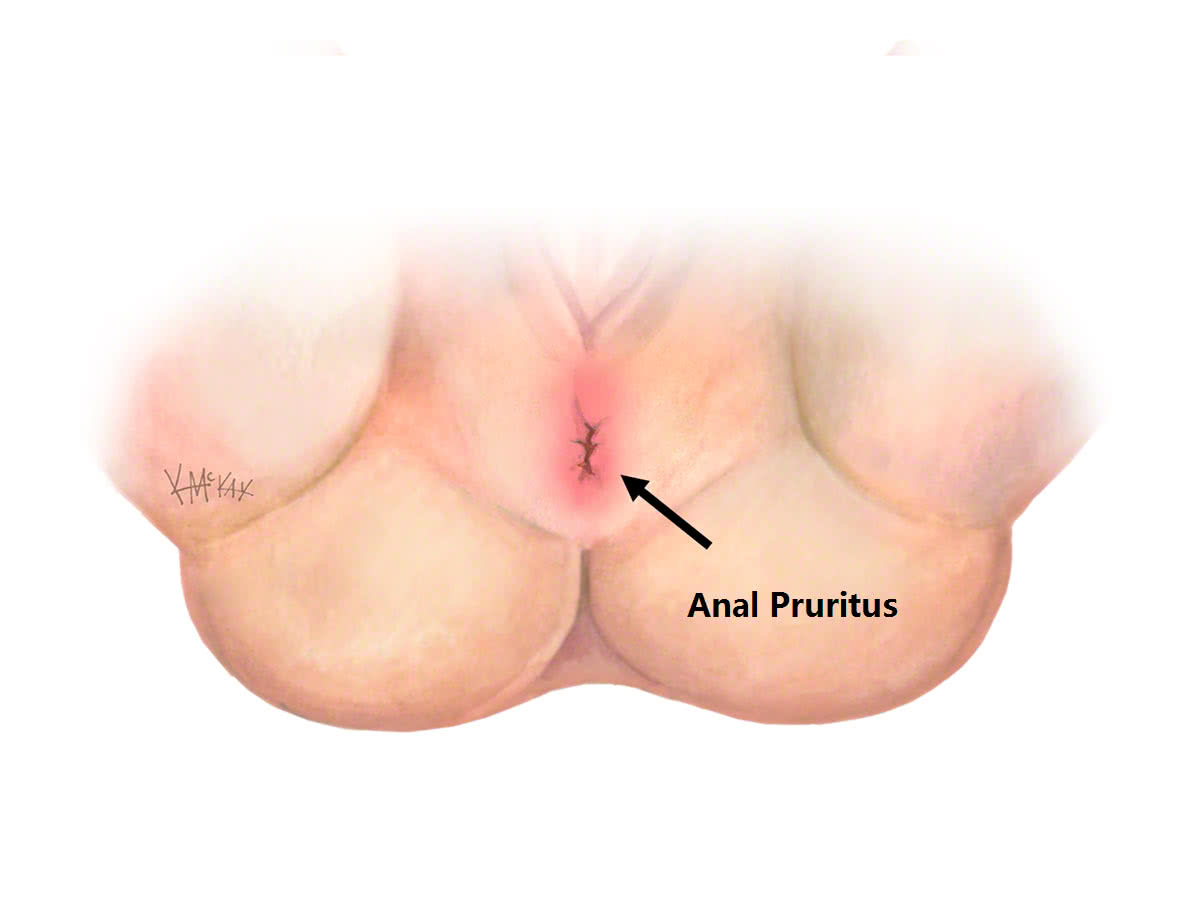 In over 75% of cases of pruritus, the cause of the pruritus is not known (i.e. idiopathic pruritus).

Infection with pinworm is common in those with young children and household pets. Less common is infestation with scabies or mites. These can all be tested for with skin scrapings or the “sellotape test” which are then sent off for viewing under microscopy.

Yeast or fungal infections may occur if there is moisture around the anus. They more often occur in people who are immune-compromised including diabetics, transplant recipients, those taking chemotherapy, and those with HIV.

Synthetic underwear should be avoided. Irritant washing powders can also aggravate the problem.

A gauze pad or combine, folded in half and placed between the buttocks so that it is in close proximity to the anus, is an effective way of reducing moisture to the region.

Baby wipes may be preferable to abrasive toilet paper and can help reduce friction, however perfumed baby wipes should be avoided.

There are many over-the-counter creams or ointments that can be applied to the anus to reduce itch. Most of these creams have a barrier compound such as petroleum jelly (Vasoline®) or zinc oxide that acts as a protectant and should be applied as a thin film to avoid excessive moisture. In addition, they usually contain a small amount of one or more active ingredients. The active ingredients include an antiseptic (chlorhexidine), a local anaesthetic agent (lignocaine, benzocaine, cinchocaine) that numb the area, corticosteroids (hydrocortisone, fluocortolone, prednisolone) that reduce inflammation in the area, and vasoconstrictors (adrenaline) that make the blood vessels in the area become smaller, which may reduce swelling and help dry the area.

Antihistamines have been shown to reduce itch[1]. However, most are sedative, and are best taken in the evening.

Stronger 1% corticosteroid ointments containing hydrocortisone (Egorcort® Sigmacort®) betamethasone (Diprosone®) may be obtained with a prescription, and have been shown to reduce inflammation and relieve itching [2-3]. They should not be used long term (i.e. more than a few days to two weeks), as chronic use can cause permanent damage to the skin.

Topical capsaicin cream (Zostrix) is a novel agent that has achieved success rates of up to 70%. It causes a low grade burning sensation, that over time, produces inhibitory neural feedback at the spinal cord level which decreases the perception of itch[4]. It comes in a 45g .075% and 0.05% and .025% strength and is quite affordable costing approximately $20.00-$25.00.

Unless you are also having a colonoscopy, a normal diet without bowel preparation, is required the day before surgery. You need to fast from midnight the night before if your surgery is scheduled for the morning, or from 7am if scheduled for the afternoon. You will be admitted as a day-stay procedure.

Following your procedure, you will recover for a hour until the effects of sedatives have worn off. You should not drive yourself home after your procedure and should have someone organised (a friend or relative) to accompany you.

Spotting of blood will occur from the injection sites. Blue discoloration to the perianal region will persist for some time. A sanitary napkin will be needed to prevent staining of your underwear.

For pain, a non-steroidal is recommended such as 400mg of ibuprofen (Brufen®) along with 2 tablets of paracetamol. This should only be taken if needed, and can be taken up to three times a day for five days. Opioid medications (Endone®) may sometimes be needed, but should be used sparingly as they cause constipation.

Excessive cleaning or scratching with abrasive toilet paper should be avoided. Washing with water or using baby wipes is preferable.

You should follow up with your colorectal surgeon in 6-8 weeks following your surgery to review your condition and discuss further management if indicated.