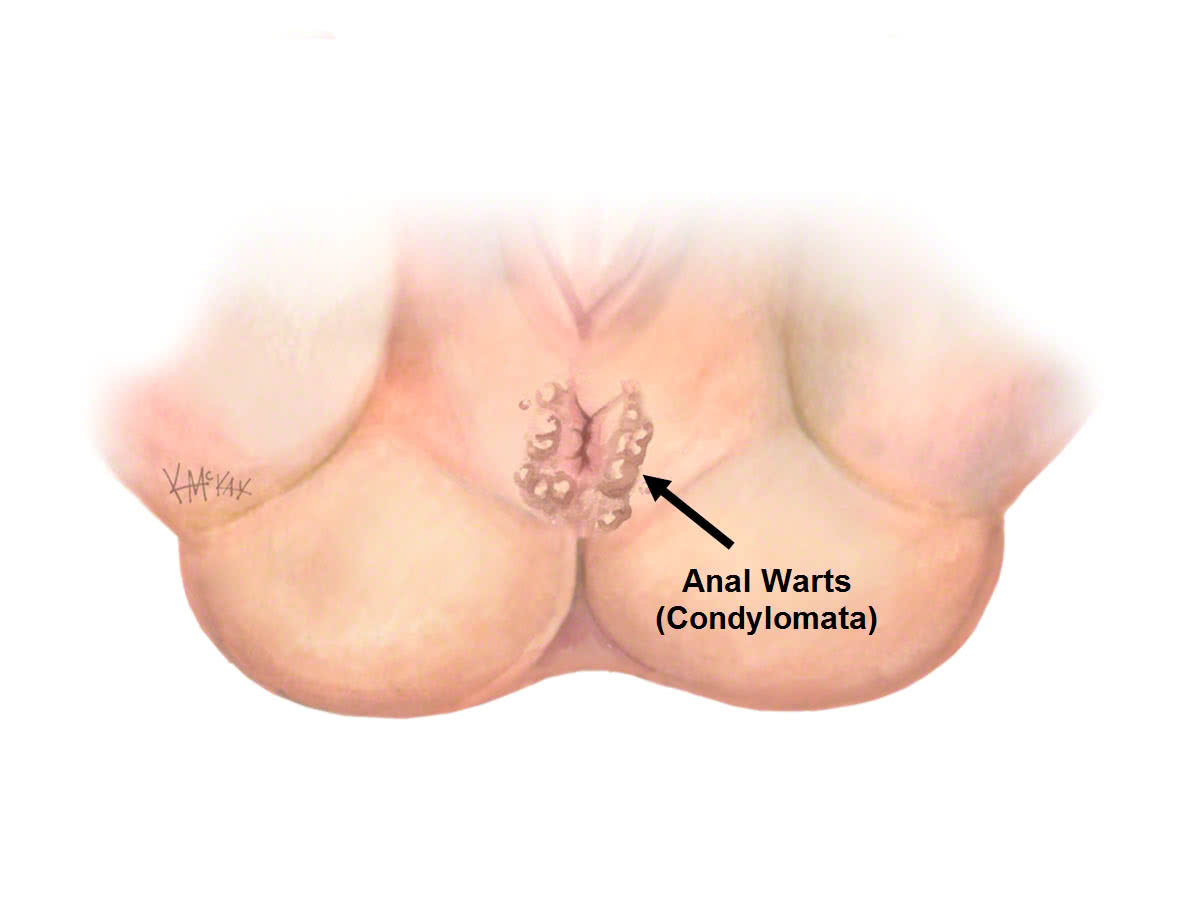 Perianal warts frequently itch, bleed and result in perianal wetness. There may be an associated lump. They are often confused for a haemorrhoid.

Peri-anal warts are usually clinically apparent. They range from small pinkish-white small lesions to much larger lesions that are cauliflower in appearance. Their diagnosis is confirmed on histology from biopsy.

Viral tests for HPV virus are available which are able to differentiate the serotype of HPV responsible. However, currently, there is no consensus opinion or convincing evidence of a benefit of routine testing for viral HPV serotypes. This is because viral serotypes are often cleared over time, and with ongoing sexual activity and new exposures, infection with different serotypes or a variety of serotypes may occur.

Since February 2013, free HPV vaccine (Gardasil®) has been provided through the school-based program for all males and females aged 12-13 years occurring in the first year of secondary school. The Gardisil® vaccine costs $153.43 each, and is recommended repeating at 3 and 6 months.

Medical therapy with topical agents such as podophyllin resins (Wartkill®), with or without acetic acid, tend to fail, and there are concerns about systemic toxicity when applied to large areas. It is therefore only suitable for small lesions, and should be applied once a week, with numerous treatments usually required.

Podophyllotoxin is more effective being the purified anti-wart compound, and is available in 0.5% solution (Condyline® paint). This can be administered twice a day for 3 days, followed by 4 days of no treatment, and this cycle is repeated for four cycles. It is successful in less than 70% of cases and causes ulceration in 10-20% of cases.

Surgical management mainly consists of electro-cautery (diathermy) to de-bulk or reduce the size of the lesions, or excision, where the entire lesions is removed, including a full thickness excision of involved skin. Whilst diathermy to debulk the size of warts is less painful than excision, it is also unlikely to be curative. Excision of the entire wart with full-thickness excision of skin, is quite painful, and 5 days of analgesics, rest, and salt water baths is required. It is not uncommon for small warts to return, and these require excision as soon as they are noticed, to allow complete eradication of the wart virus.

Unless you are also having a colonoscopy, a normal diet without bowel preparation, is required the day before surgery. You need to fast from midnight the night before if your surgery is scheduled for the morning, or from 7am if scheduled for the afternoon. You will be admitted as a day-stay procedure. You will receive a fleet® enema 1 hour prior to your operation.

Following your procedure, you will recover for an hour until the effects of sedatives have worn off. You should not drive yourself home after your procedure and should have someone organised (a friend or relative) to accompany you.

Spotting of blood will occur for 5 days following you procedure, and a sanitary napkin will be needed to prevent staining of your underwear. Bleeding will typically occur after opening your bowels. If the bleeding is more than a couple of teaspoons a day, notify your surgeon.

You should remain on regular laxatives and simple analgesics for 1 week. A tablespoon of natural Isphagula husk (Metamucil® or Fibogel®) twice daily is usually enough. If constipation develops, 30ml of lactulose (Duphalac®) twice daily is recommended.

You should follow up with your colorectal surgeon in 6-8 weeks following your surgery to review your wound and discuss further management if indicated.