‘Rectal’ bleeding (hematochezia) refers to the passage of red blood from the anus, often mixed with stools and/or blood clots.

It is called ‘rectal’ bleeding because the rectum lies immediately above the anus, and although the bleeding may be coming from the rectum, it may also be coming from higher up in the gastrointestinal tract (GIT).

Rectal bleeding is commonly due to diverticular disease. It can also be due to colitis, proctitis, angiodysplasia, colorectal cancer, polyps, or haemorrhoids. 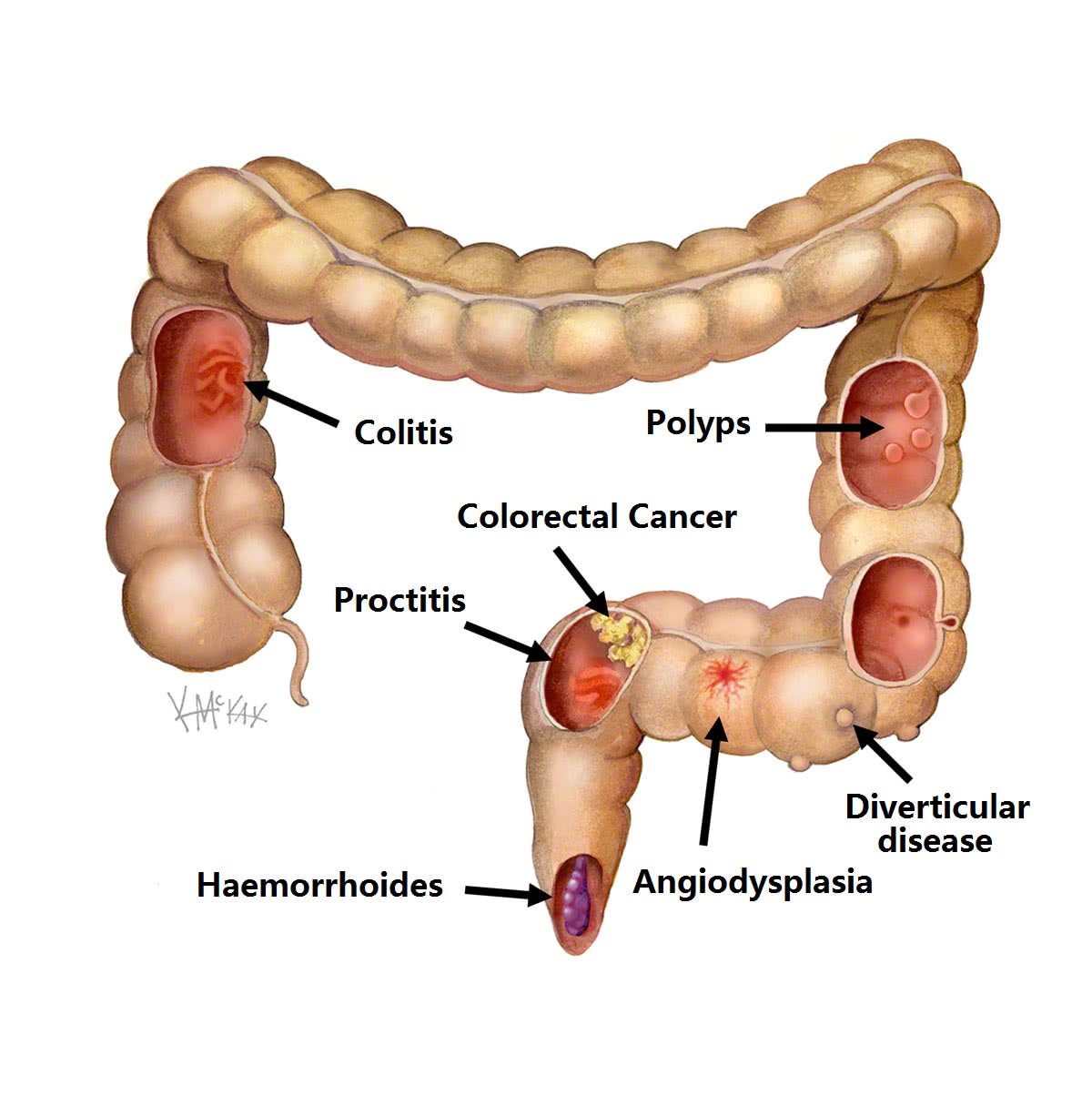 The severity of rectal bleeding varies widely. Usually rectal bleeding is mild and stops on its own. Frequently only a few drops of fresh blood are passed on straining or on wiping. This can appear dramatic, as it turns the water in the toilet cistern pink-red. Alternatively, one may see spots of blood on the tissue paper. Others may report brief passage of a spoonful or two of blood.

Mild rectal bleeding usually settles on its own, but warrants referral to a colorectal surgeon for further investigation.

Rectal bleeding also may be moderate or severe. Patients with moderate bleeding will repeatedly pass larger amounts of bright or dark red (maroon-coloured) blood often mixed with stools and/or blood clots. Patients with severe bleeding may pass several bowel movements or a single bowel movement containing a large amount of blood. Moderate or severe rectal bleeding can quickly lead to significant blood loss resulting in symptoms of weakness, dizziness, light-headedness and a drop in blood pressure when going from the sitting or lying position to the standing position. Occasionally the bleeding may be so severe as to cause shock from the loss of blood.

Moderate or severe rectal bleeding usually requires admission to hospital for further investigation and management. Occasionally a blood transfusion is required. A CT angiogram with intravenous contrast may show the site of bleeding, and allow for this bleeding vessel to be blocked using angiography.

Bright red versus maroon versus black

Occasionally, brisk large bleeds from the upper gastrointestinal tract (GIT) (oesophagus, stomach and small intestine) occur so quickly, that acid and bacteria do not have time to change the colour of blood, and rectal bleeding can be bright red in colour in this instance. This warrants emergency admission to hospital as shock can result if left untreated.

Rectal bleeding that is visible needs to be distinguished from another type of gastrointestinal (GIT) bleeding, which is not visible referred to as occult bleeding. Occult bleeding refers to the slow loss of blood usually from high up in the colon, or even from the upper GIT (oesophagus, stomach or small intestine), that leads to anaemia. The blood is detected only by testing the stool for blood using faecal occult blood testing (FOBT).

Referral to a colorectal surgeon to discuss performing a colonoscopy and gastroscopy is important in determining the cause of rectal bleeding. This will allow complete visualisation of the lower GIT (anus, rectum and colon) as well as some of the upper GIT (oesophagus, stomach and duodenum). It will also allow for biopsies to be taken.