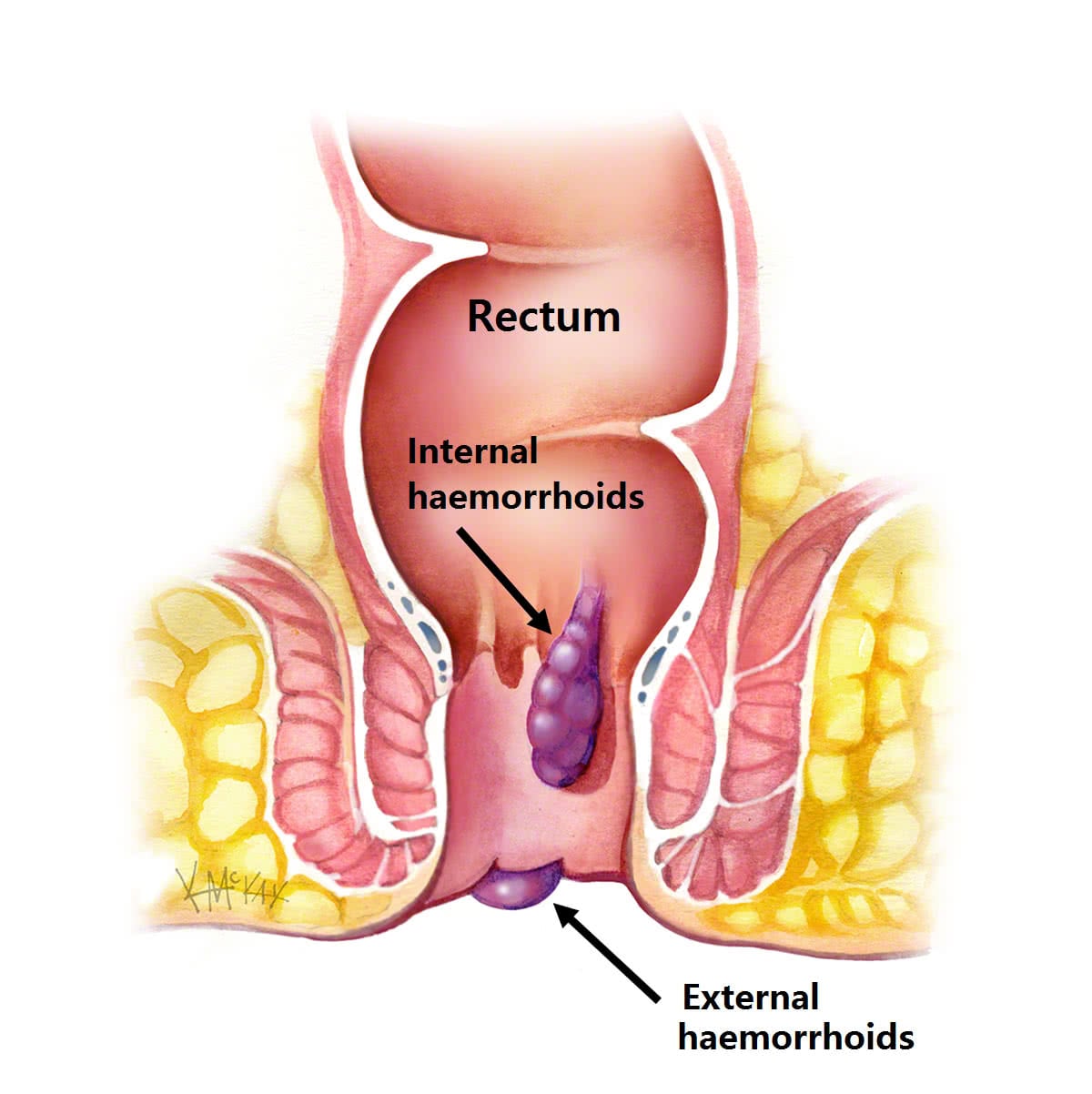 Internal haemorrhoids, so long as they remain internal, are rarely painful, but are prone to bleeding, particularly with a bowel motion. Typically bleeding is only on the toilet paper after wiping, with blood on the stool, but not mixed in the stool. When internal haemorrhoids fall outside the anus (prolapse), they can become extremely painful, especially if strangulation occurs.

An external haemorrhoid is a very small hard blue lump much like a blood blister that is completely external to the anus and arises from the external vascular channels. It often presents as a sudden painful lump. It usually settles without surgery, but occasionally when very large, requires surgery for symptom relief.

Internal haemorrhoids can be further graded according to whether they are in the anus or have fallen out (prolapsed).

Untreated internal haemorrhoids (Grade I) can eventually enlarge to the point where they fall out (prolapse) and won’t go back in (Grade IV).

Prevention is the best way to avoid haemorrhoids. This involves keeping the stools soft so they pass easily, decreasing pressure and straining. The urge to have a bowel motion should not be suppressed. Rather, one should be encouraged to empty bowels as soon as possible after the urge occurs. Regular exercise and increased fibre in the diet help reduce constipation and straining by producing stools that are softer and easier to pass. The least possible time should be spent on the toilet, and this may require removing the newspaper or magazines from the toilet to avoiding reading while on the toilet.

There are many topical agents and suppositories available for the treatment of haemorrhoids. Their main aim is to prevent thrombosis or itch. There is little evidence to support their use. Common ointments include those containing a combination of a zinc oxide barrier with a local anaesthetic (e.g. Rectinol® or Anusol Plus®) or a combination of corticosteroid with local anaesthetic (e.g. Scheriproct® and Proctosedyl®). Although these do not treat the underlying cause of haemorrhoids, they may partly reduce the pain and inflammation responsible for the itch. Thrombosed prolapsed haemorrhoids may cause anal spasm which is occasionally relieved with topical nitrate ointments such as Rectogesic®.

Rubber band ligation (RBL) is a procedure where elastic bands are applied to the internal haemorrhoid at least 1 cm above the dentate line. These eventually slough off within a week. This is a painless procedure unless the band is placed too close to the dentate line. If this occurs, intense pain may result.

This convenient and relatively non-invasive procedure is successful in the short-term in over 70% of cases. Recurrence remains as high as 30%.

Doppler-guided haemorrhoid artery ligation (HAL) involves the use of a doppler to identify the arterial vascular pedicle, which is then tied off with a stitch. This reduces blood flow to the haemorrhoid, which over time shrinks the size of the haemorrhoid. It is suited for internal haemorrhoids and has the benefit of being minimally invasive. 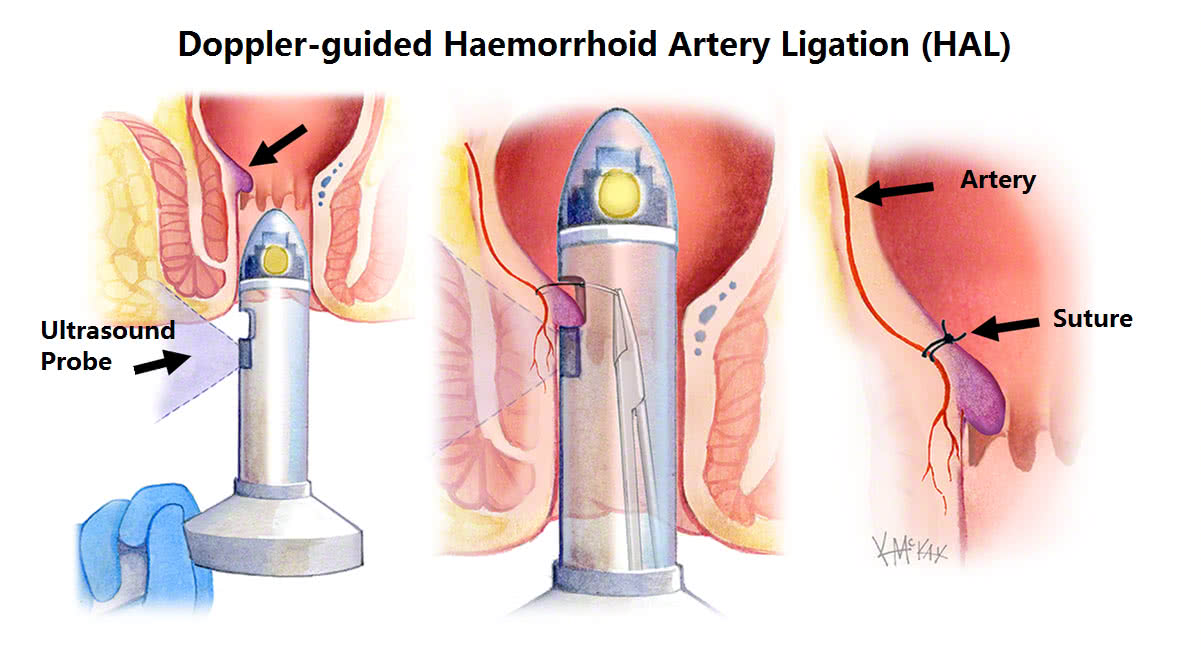 Haemorrhoidectomy is the surgical removal of haemorrhoid tissue. As you look at the anus, most haemorrhoids are located in the 3, 7 and 11 O’clock position. Excision of these three haemorrhoid cushions leaves three raw sores that are said to give the appearance of a “clover” (Fig 2). Amazingly these sores, with the aid of warm to hot salt water (Sitz) baths, always heal, but can be painful in the first few days following surgery.

What to expect pre and post operatively for haemorrhoid surgery

Unless you are also having a colonoscopy, a normal diet without bowel preparation, is required the day before surgery. You need to fast from midnight the night before if your surgery is scheduled for the morning, or from 7am if scheduled for the afternoon. You will be admitted as a day-stay procedure. You will receive a Fleet® enema 90 minutes and 60 minutes prior to your haemorrhoid operation.

Following your procedure, you will recover for an hour until the effects of sedatives have worn off. You should not drive yourself home after your procedure and should have someone organised (a friend or relative) to accompany you.

Spotting of blood will occur for 5 days following your procedure, and a sanitary napkin will be needed to prevent staining of your underwear. Bleeding will typically occur after opening your bowels. If the bleeding is more than a couple of teaspoons a day, notify your surgeon. Bleeding following rubber band ligation typically occurs 7-9 days following banding, and may require a course of 400mg of metranidazole (Flagyl®) three times a day for 5 days to settle it down.

For pain, a nonsteroidal is recommended such as 400mg of ibuprofen (Brufen®) along with 2 tablets of paracetamol. This should be taken regularly three times a day for five days. Opioid medications such as oxycodone (Endone®) may sometimes be needed, but should be used sparingly as they cause constipation. Combined oxycondone and naloxone (Targin®) may be a better option, with less risk of constipation.

You should call 1300 265 666 to make a follow up appointment with your colorectal surgeon in 2-6 weeks following your surgery to review your wound and discuss further management if indicated.